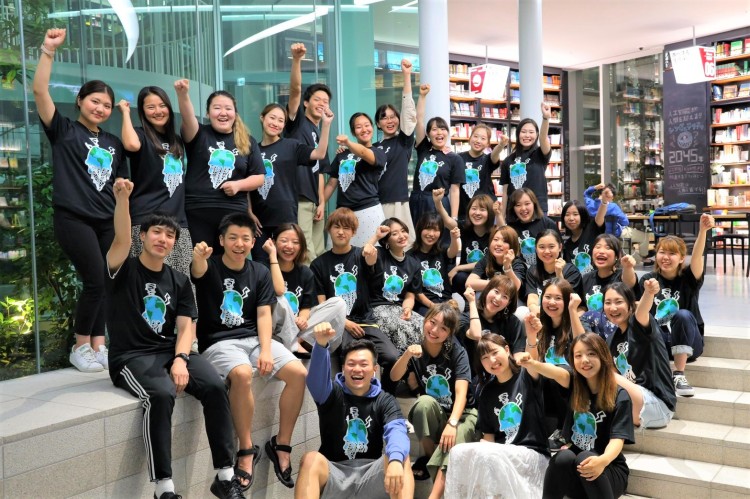 This summer 39 students from Kindai University will get confirmation that experience is the best teacher when they finish eight months of planning to run a three-day conference for 490 participants.

“It's not every day that you can say that you are leading a group of people from 22 different countries with different backgrounds,” said Mizuki Oshima, a fourth year Kindai student who is serving as the Director General of the Japan English Model United Nations (JEMUN) conference that runs July 13-15 at the university.

Ms. Oshima is one of eight Kindai students in a JEMUN senior-secretariat leadership role. There are also 31 more working as planners. All are preparing for the conference was through a course led by Associate Professors Todd Thorpe and Shigehiro Haruki.

The course helps students from the Faculty of International Studies prepare for the annual JEMUN conference, which will bring together from 42 universities and 10 high schools. The English-only program teaches collaborative problem solving in a United Nations setting, with this year’s conference focusing on climate change and disasters. The conference also features eight invited speakers, 87 volunteers, and nine student researchers.

“Preparing for JEMUN is scary,” said Ms. Oshima. “[Last year] as a planner we mostly did the jobs that were provided. But now I am in the role where I am the one providing the tasks, and it was so hard to process everything that was going on in the background, and then creating the masterplan…. It’s hard work and tiring, but after the three days [of the conference] the sense of accomplishment will be all worth it, and prospective employers will love hearing about it.”

What makes JEMUN stand out from other Model United Nations conferences is its emphasis on teamwork. If students choose to compete with each other rather than collaborate, they are not invited back. Most attendees serve as delegates, a representative of a country, who have discussions with other country delegates to find solutions to world-wide problems. This year’s theme is “At the Crossroads of Climate Change”.

JEMUN participants also can choose to be a conference journalist, who write articles, take photos, shoot videos, prepare podcasts, or draw comics whilst learning from professionals – among 41 adult advisors to the conference. Each media student is responsible for covering a meeting room during the three days. Some of the student journalists are responsible for compiling all of the coverage into an online digital magazine.

For the Kindai students who are in the faculty of International Studies leaders and planners, conference preparation began in December 2018. Every Friday from 18:25 until 19:55, the students were split into three groups -- External Relations, Conference Logistics and Conference Services -- to prepare for the conference. Each group has small groups within them, which let each organizer be responsible for their job. For example there are teams that are in charge of the catering, or the surveys, even for the social media. These may sound very simple, however each of them come with their difficulties as for instants, the catering, they have to make sure they are not using any plastic as the conference this year's main focus is climate change. 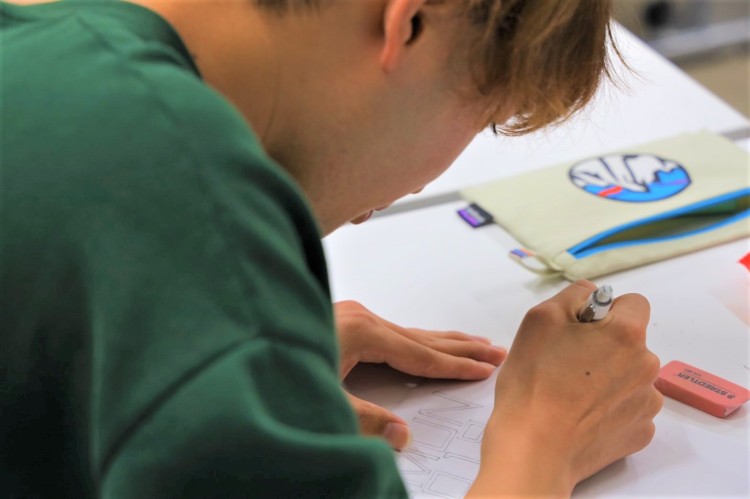 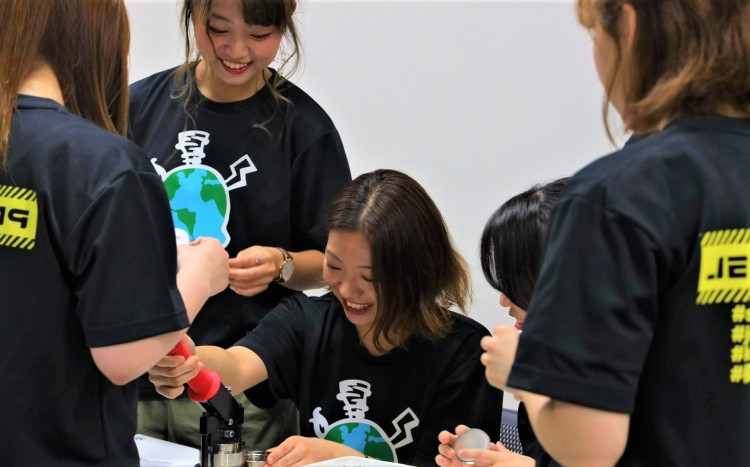 “Creating badges that will be sold at the conference” 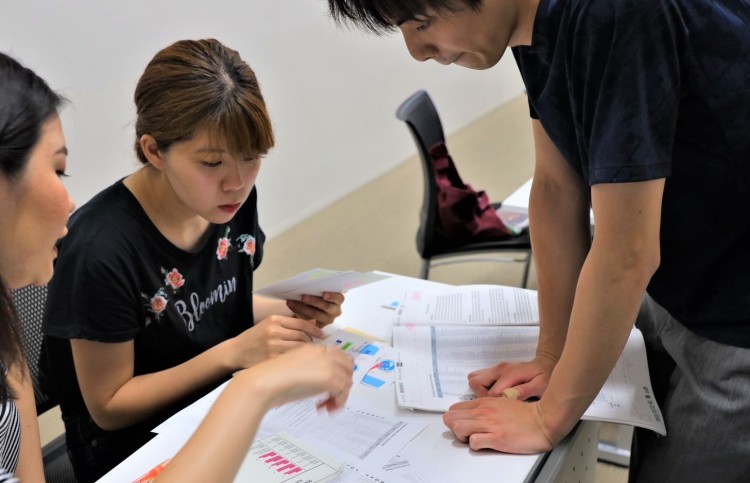 The class allowed students to make mistakes and learn from them. Conference advisor Professor Thorpe said the students are put in an environment similar to what they would do upon graduation and getting a job. In a company setting, one mistake could lose clients or put the company into jeopardy. However, Professor Todd Thorpe said the JEMUN class provides its students with professional experiences, including contacting businesses, negotiating prices and solving problems that occur. The skills students learn through the JEMUN program can be used when they get jobs after graduation, but also can be used while they are job hunting. 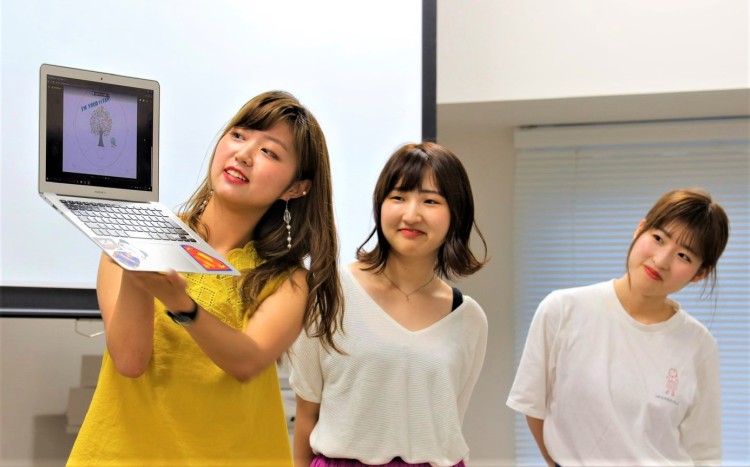 “Sharing fan designs that will be sold at the conference”

The benefits of these skills for job hunting are evident when we hear our sempai getting jobs at large companies such as Rakuten and Fujitsu. We hope that we also have similar success stories when we become senior secretariats next year. 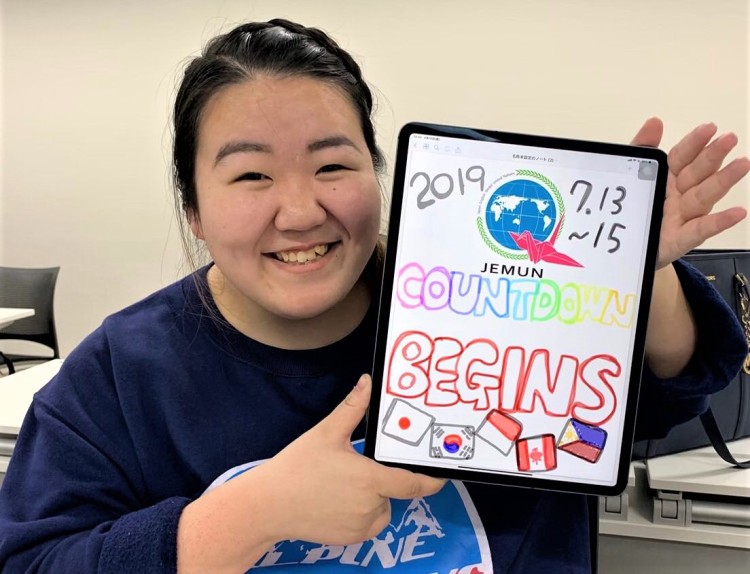 She is a third-year student at Kindai, who is responsible for overseeing all the student journalists at JEMUN 2019. She attended Someyaoka High School in Nagano, Japan, and was born In England and lived there for 11 years.